Some people wait for years to replace a beloved pet. Not us.

When we had to put down Pisgah—my fifteen year old Cocker Spaniel—I couldn’t go back  home without her there to greet us. She had been through my first marriage with me. After my divorce, she was with my son Charlie when I couldn’t be.

She was my jogging buddy—always beside me, leash-less. When her years began to add up and she started to lag behind, her long silky ears flopped all the more from the extra effort. She began to surrender on her squirrel chases. She became deaf and found her way by scent.

In spite of it all, as she aged, people would still ask if she was a puppy.

After a bath one night, she shivered and was short of breath. I thought it was from the cold but it didn’t stop. We soon discovered that her heart was enlarged. It couldn’t contain all her love. 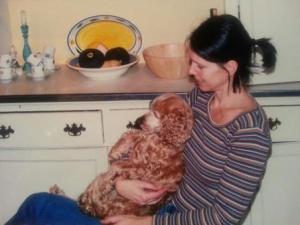 Todd stood by my side as I held her in my arms and she looked up at me. The vet gave her the shot that put her into a sweet, deep sleep.

It was too hard to walk back into our house after that so we went for lattes. We came up with the idea to take a drive to the pet store where my brother had found a puppy.

We walked in and I immediately noticed a teddy bear. He sat up with a stick-straight dancer spine and looked me square in the eyes. Hopeful anticipation…..Please love me ma’am (get me out of here!). I asked to hold him and the salesperson took him from his cage and set him down in an observation pen. 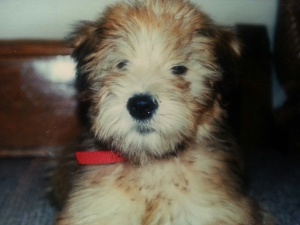 I watched him play, rubbed his belly, let him lick the tears that were still fresh in my eyes, and tried to stop him from gnawing on my fingers with his sharp teeth. 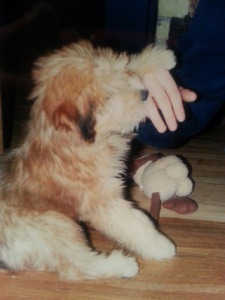 By the time Todd found out we couldn’t afford him, it was too late. Without any research, we made an impulse buy and busted our budget. We were so sad and Sam was such fun. We returned home with a big pen and all the dog accouterments—poorer but puppy rich.

I sobbed through that evening, playing Puccini in Pisgah’s honor while Sam scooted around. 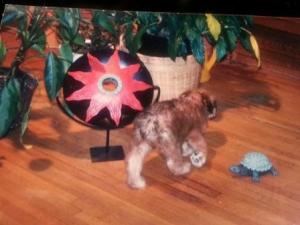 He chewed the legs of all our furniture but was particular about the shoes he ate. They had to be new and bone colored. He destroyed our rugs and carpeting and ate anything—including a lighter. He was a butane hose for days and had to spend them all in his pen.

Frozen in snow after playing with his best friend Cookie Dermond

Garbage cans scare him. He is a sniffer not a jogger and can easily spend thirty minutes on one block. He was hard to train and still jumps up on guests. He snarls at some dogs but only after I have assured the owner he is friendly.

He got his certificate from obedience school because the trainer was relieved to be done with him. “This is how you walk a dog,” he would say taking Sam by the leash and proceed across the room. “Heal! Heal!! HEAL SAM!!”  Sam does not heal.

He is strong-willed but sweet and confused about being a dog. He sits on the stairs like a person—upright on the step. He has made our furniture his own and when Todd gets up in the morning, Sam immediately jumps up beside me and lays his head on Todd’s pillow. 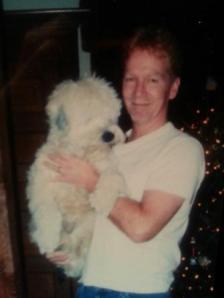 We work all day so we got a kitten to keep him company and named her Rose.

Her alley cat mom weaned her too early so the former owner’s dog had become her surrogate mother. When Rose met Sam she attached her mouth to a nipple. He stared at us, What the heck? but they became best pals.

I eventually got Sam to walk to the lakefront and home again without a leash. I would carry Rose along in a papoose. The three of us would do the full two and a half mile circle together…until the day Sam saw a parachute.

He stopped, turned and took off across the beach, running past honking, screeching cars. He was covered with the lake’s algae and tends to look rabid when wet. No one could catch him. He disappeared into the ravines. I called for hours. I was almost home when I noticed him sauntering along a couple blocks ahead of me.

I keep Sam on a leash now most of the time and have never been successful with getting him to walk leisurely on the lakefront. He’s always looking for that parachute.

So, when we brought balloons home from an event last night, Sam escaped up the stairs and hid in the bedroom.

He just has a thing about floating aberrations.

I sometimes wonder what would have happened to Sam if we hadn’t been so impulsive that day at the pet store. It doesn’t matter….Sam has Pisgah to thank for that….and I’m sure he will one day.

He’s just not ready yet to join her.

Students set the gym mats on fire in the school basement and tables and chairs were flung through the windows of the third floor cafeteria. There was obvious tension created by bringing kids of different backgrounds together and it blew up not long after we arrived at Riverside in 1970. I remember the day teachers had to lock the classroom doors from the rowdiness filling the halls.

I sat at my desk and watched the anger on the faces of the mob of kids passing by and looking in the glass window of the door. Our teacher kept teaching. Todd was in French class and some kids smashed his classroom door window and came in. One of the kids danced with Mrs. Lynch, the French teacher. “They ballroom danced,” Todd said as we remembered the day together. “She was really cool about it. They just danced and the kids left.”

I thought to myself, once again, if there was more dancing there would be less fighting.

“Don’t go in there, Bill.” Mr. Kennedy said. “You’ll only make it worse. They’re meeting together. Let the kids talk it out.”

“I’m going in Joe. They can’t just take over the school like this.”

Dad gave in, “Alright, I won’t go into the auditorium today. But I will never come back to this school and be told where I can and can’t go.”

The days passed and things calmed down. Mom and Dad were at the school a lot, walking the halls. They got to know the administration, teachers and eventually some of the student leaders like Rodney Drew. They went to the SPTA meetings and tried to help the school raise money. 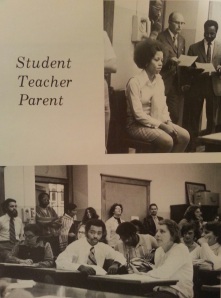 Brookfield fundraisers had been ice cream socials where everybody baked things and brought them to sell. When Dad suggested something like it, the kids laughed—‘Ice cream? Why not sell barbecue?!’ And so Riverside had its first barbecue fundraiser.

“Usinger’s was a client at the time,” Dad said. “I talked to them about getting a good price on spare ribs. We had no idea how many people would turn up so Usinger’s agreed to stock Sentry on Oakland Avenue which was a couple blocks from Riverside. We would be able to easily pick up more meat if we needed it and avoid having a bunch of ribs leftover.

We needed a big grill and I remembered a client who had had a barbecue grill made out of a horse water trough. So I found one of those and took it to Riverside Park on the top of our Ford station wagon. The idea of having the barbecue was a risk because there was such tension at the time between the white and African American students. But everybody agreed to try it as a way to bring the Riverside kids together and hopefully raise some money.

We lost $275.00—I should have known you can’t make money on meat—but it went well. A newspaper reporter from the Journal came and wrote a story on it. I could not believe his headline:

I just couldn’t believe that. It was such a great opportunity to make a positive story—from disruption at school to a barbecue picnic…..from disturbance to joy. Of all the things he could have said, that’s what he chose. I did call him but it was such a missed opportunity.”

I reflected on what Dad said about the reporter. I’m sure he just wrote about what he saw that day. He was probably right—friends hung out with friends. The point though, was that we were all there together. Compared to what we had all just been through, it was a hopeful step in the right direction.

I was sitting at my desk this past week scheduling my visits to our Ballroom and Tap classrooms throughout Milwaukee. This is no small task—there are eighty-seven of them in fifty schools this year. Each school, like each student, has a personality and history all its own and deserves special attention. I like to ride my bike to the schools, though many are now out of riding distance. Last year, I got lost around Hadley and 1st Street on one of my trips and asked a lady on the street for directions. She said, “Honey, you have to ride your little fanny right back up that hill you just came down, take a right at the top then go about six blocks.”

One of the public schools in our program is Lloyd Barbee Montessori. Lloyd Barbee was one of the most important figures in the Milwaukee Civil Rights Movement during the 1960s. He started his own law firm in 1962 and headed up a number of civil rights organizations including the Madison NAACP. He was a longtime advocate of total school integration and led the struggle to desegregate Milwaukee Public Schools. His daughter Daphne Barbee was in our class at Riverside—she was a cheerleader and in Todd’s AP (Advanced Placement) English class.

In the 1970s, Riverside High School was one of the first MPS schools to bring kids from different neighborhoods together and try to make it work. For the most part, it did, though some may feel differently. Today, Milwaukee teachers and administrators are working hard under difficult circumstances. When I think of Danceworks faculty traveling throughout the city to bring ballroom and tap into the classrooms, I think of Lloyd Barbee’s work in the 60s to bring students together. I wonder what he’d have to say about seeing our students working together today and our schools coming together through a dance program. I think of the Riverside Barbecue.

Maybe it took a little longer than you would have thought Dad, but maybe, just maybe we are moving in the direction from disruption to joy. It takes time to get to know and understand and love and trust each other. You have to give it time.

“Human progress never rolls on wheels of inevitability; it comes through the tireless efforts of men willing to be coworkers with God, and without this hard work, time itself becomes an ally of the forces of social stagnation. We must use time creatively, in the knowledge that the time is always ripe to do right.” Martin Luther King Jr.