The Island’s charm captures you as you make the final stretch down the winding road before the ferry dock. The call of the gulls echoing through the air is its serenade to you, “All is well..…”.

Dad had the cabin on Washington Island completed in 2000. It stood looking out across the water as a stunning representation of 50 years of marriage. 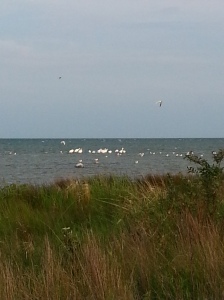 It was also the perfect place to celebrate those 50 years. My parents began making plans to have the members of their wedding party, family and a few close friends take the ferry ride and stay for the weekend.

Everyone was excited—no more tents! 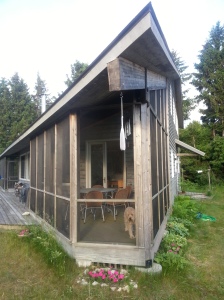 While Dad was busy with the design and construction of the cabin, Mom took charge of the interior furnishings—complimenting the line of Dad’s design with durable elegance. She wasn’t expecting to discover that she needed eye surgery that would call for two weeks of healing time lying face down in a special chair. Though upset by the news and suddenly concerned about the condition of her eyes, she got through it one day at a time. But then there was a bout with shingles, followed by the loss of her younger brother Joel—leaving her as the sole member of her immediate family. Too sick to attend his funeral, she was already sad, sad, sad when the next news arrived—her cancer had returned.

With Dad’s support, together they decided to go ahead with their anniversary plans.

When in doubt, plan a party. Mom had the most delicious assortment of cakes made by a baker on the Island for the event. A good family friend/musician named Julian was invited to play and along with his band filled the celebration with music—everyone dined at Bitter’s Inn, dancing and singing well into the night. Mom took the stage briefly and shared her latest news with those she dearly loved saying, “But that’s not why we’re here. We are here to celebrate and that’s what we’re going to do!” And that’s what we did. 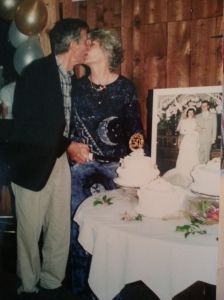 Mom directed church choirs and worship for decades and the Sunday morning following the anniversary party was no different. We all received our assignments for the service which Mom put together that took place at the cabin. It was followed by a breakfast including freshly made Island bagels delivered still warm that morning. There was plenty of coffee and the world’s best fresh air and glittering sunshine.

To paint the full picture, fast forward seven years. Mom and Dad took a trip to New York to get away and see some shows. Mom wanted to visit Brooklyn Tabernacle while they were there because she had been using their choir music for years so they took the subway to Brooklyn before their flight home on Sunday. They listened to Jim Cymbala preach and heard the choir which was led and conducted by his wife Carol. Someone told them about Tabernacle’s Learning Center and after the service they went across the street to visit. Though it began with a small number, it was now serving well over a 1000 students gaining skills in reading, writing, math and computers with many achieving their GEDs.

Mom saw a great need to strengthen the connection between her church and its community. A learning center at Eastbrook would be an opportunity to do that. The year following their New York trip, she was asked by the senior pastor to help train a new staff member for city ministry. Mom thought a trip to Brooklyn would be helpful. The staff member arranged for the two of them to stay with a Russian family that he was working with through his foreign missions.

It was important for the trip that they travel light so Mom flew to Brooklyn several weeks later with nothing more than a backpack. She ignored the pain in her ribs and shortness of breath which the doctors couldn’t explain and kept dismissing. She and the staff member used the train to get around the city and the young man’s eyes would light up when they experienced anything Russian. It became apparent to Mom pretty quickly that the young man’s interest was foreign missions not city ministry.

Mom commented later she really didn’t know how she was able to go up and down all those subways steps. She did it one step at a time.

Shortly after her trip they discovered the cancer had indeed returned and this time it had metastasized.

Mom’s will to live was strong. She looked to her faith for guidance through each and every twist and turn. She longed to know Jesus intimately and went deep. What followed next would be her greatest trial of all….the loss of her 54 year old son to an unexpected heart attack. 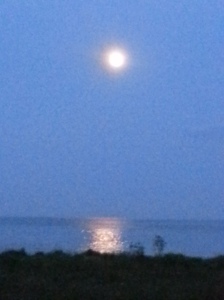 The first moonrise I ever saw was on the Island. It amazed me how it looked like a path across the water leading right into Heaven….its metaphor calling to you, “Follow Me….”

2 thoughts on “Grace Under Fire”