Look at this roof! I can’t even get bookshelves to stay mounted. My office looked like a tornado had hit when my shelves crashed to the floor. The thought of dealing with wide span concrete structures and cantilevers makes my heart pound.

Though I’ve been exposed to beautiful architecture all of my life, I have never really been able to appreciate the level of expertise, courage and depth of understanding that goes into it until I looked at this roof and thought of my bookshelves.

“One of the highlights of our travels had been a meeting with Pier Luigi Nervi. He was an Italian engineer and architect known internationally for his large-span structures built of reinforced concrete. He didn’t speak English but with the help of one of his men as interpreter we had a very pleasant visit. He showed us around his office and explained some details of his current work. We were pleased to note that he does much of his calculations and drawing himself. The following day, one of his men gave us a guided tour through his partially completed soccer stadium in Rome. The reinforcing steel is preassembled and then lifted by crane into the concrete form.

After all the steel is in place, for any thin section, Nervi used a fine mesh (similar to our chicken wire) over the total reinforcement. Nervi’s man explained that from experience the stresses are distributed better and the actual strength is greatly increased over the calculated strength when the mesh is used. Nervi seemed to be a very forceful yet quiet and humble man—similar to his structures.

Another significant privilege was having a meeting with Italian architect, author and publisher Bruno Zevi.  A recent publication of his, Architecture as Space, guided me a great deal through my time in Europe. He eventually published quite a bit of my work including the thin shell concrete structure churches and school, followed by Eden Theological Seminary in St. Louis. 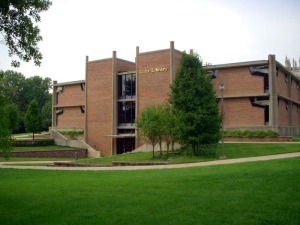 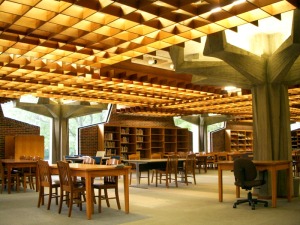 When I think about the renown of these two men and their incredible talent and ability in structure and architecture, I‘m overwhelmed that I could walk into their offices unannounced. Each of them gave me a considerable amount of time.

We left Paestum, Italy and traveled to Turin where we saw Nervi’s Exhibition Hall. We were quite prepared for this work form the coverage Time Magazine had given it in 1958, Poetry in Concrete, and from the photos in Nervi’s book, Structures. The interior was all we had hoped it would be, but the exterior (we had never seen a photo of that) was tremendously disappointing. The large rectangular entrance section reflected none of the beauty of the arched hall—it appeared to be an afterthought. The arched portion itself was water-proofed with some black tar or asphalt and lost all feeling of concrete. We do not know the history of this project, but we imagine Nervi did only the engineering and was not the architect. If this is the case, the building is to us a perfect example of the need for a more complete integration of structure and aesthetic design. We believe that during a period of architectural (or cultural) advance, as we are now in, structure and architecture out of necessity become one.

Next we headed south to Nice, France and along the Riviera to Barcelona, Spain. The winter before our trip, the Museum of Modern Art had the exhibit of the work of a Spanish artist named Antoni Gaudi. 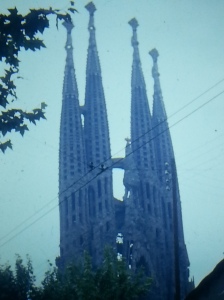 We’d never heard his name before and were quite anxious to experience his work. We stood before his “Temple of the Holy Family” which had only its front facade and spires completed but it was enough to convey his thought.

His work seemed to “drip” with ornament and apparently was based on no systematic module. It was entirely free—unrestricted. 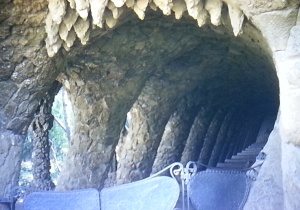 As we continued to drive around Barcelona, seeing more and more of his work, we began to respond to it in a much deeper way than we had at first. He had shown us the vast possibilities of architecture. He used the basic structural system of the Gothic period. However, he was not limited to the development of that period as we in America were when the Gothic revival swept our country. His columns were not limited to a vertical position, his vaulted bays were not necessarily rectangular or even symmetrical, his walls were seldom plane surfaces, his roofs were not merely a covering but often sculptural shapes covered with bright colored ceramic tile. All of his work showed a plasticity of form and unity of structure and ornament that we had not seen before. When we experienced the space of his work, we realized far better the full potential of architecture and its effect on the emotions and feelings of man. 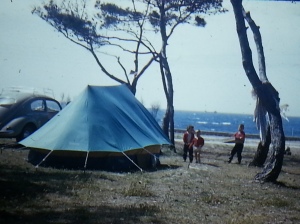 Our campsite in Barcelona 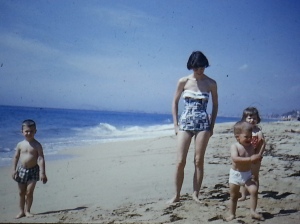 We went north and west through France. Along the way, we experienced the work of Le Corbusier. The first work of his we came across was Unite’ d’habitation at Marseille. That impressed me and later impacted my work. I was greatly surprised at the honesty, almost crudeness of his use of concrete. 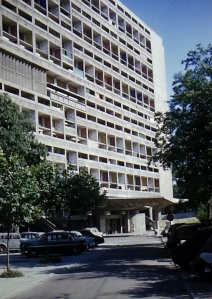 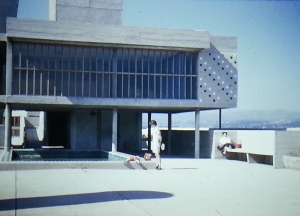 Rooftop which had a pool and workout area

We were disturbed yet pleased by the natural, almost unkempt appearance of the surrounding grounds—no mowed grass or flowerbeds, only natural shrubs and trees. We also saw his houses at Pessac and the Villa Savoie at Passay—one of his most famous.

We had recalled seeing pictures of it but were not prepared for what we found. It had been in a state of abandonment for many years. Draperies were rotting on their rods, dishes and silverware lay on the shelves, furniture and cushions were scattered everywhere, glass broken, flower beds covered with weeds. Our French wasn’t good enough to find out why it was deserted. When we asked a policeman, he merely shrugged his shoulders. Nevertheless, the house in its present condition gave us the opportunity to scrutinize everything and see it all far better than had it still been in use. We couldn’t help ponder the question—what good is architecture if this can happen to such an outstanding example?

Along the way through France, we camped at a site right at Corbusier’s Chapel Ronchamp. The Chapel had been covered by many magazines and I could only say it was deeply inspiring—its curving roof, unique use of glass, flowing walls and brackets—all mindful of Gaudi. 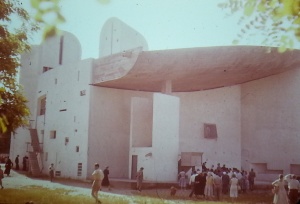 We had at this point completed our travels in southern Europe including Switzerland, Austria, Italy, Spain and France. We had spent some time in Munich, Germany and were preparing to head north to Cologne, then on to Brussels and the World’s Fair, then to England and finally to Scandinavia.

Camping proved to be interesting—especially with the children—and campsites were available everywhere. The cost was usually 25 to 50 cents per night. Toilets (in one form or another) were always provided along with drinking water, sinks, showers (cold water), gas stoves (we had our own), etc. and had proven to be as economical as we had hoped. 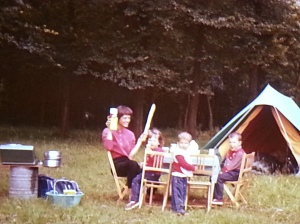 Mom with French bread and wine. The only way to camp.

Since Rome, we lived in the outdoors, rain or shine, including our cooking on a two burner Kerosene stove.

Mom knew how to wash diapers. While sipping champagne of course!

We washed clothes by hand, bathed in water heated on the stove, slept on air mattresses and blankets—we missed our sleeping bags which were back home. Our camping life was a full story in itself. It wasn’t exactly restful but it was certainly healthy.

We returned to Spaichingen to the Alte Poste Hotel and repacked all our things. We left behind our trunk and two large suitcases to be shipped directly to the ship for our return voyage. We also paid a visit to the sisters in Bremerhaven. 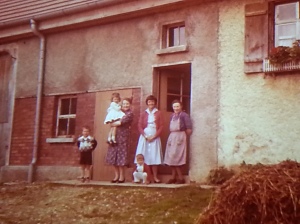 A second visit to Dad’s relatives in Shpaichingen

We wore blue jeans or shorts and each of us had only one good outfit for “town”. It took us two hours from the time we got up to the time we were ready to travel in the morning and about three hours to set up, cook, eat and get to bed at night.The weather was excellent for camping in Italy and Spain, fair in France and lousy in Germany—cold and rainy. We hoped for improvement as we traveled north.

In regard to food, we had had no great difficulty up to this point. We’d been drinking any water designated as drinking water and Dolores had been buying fresh fruits and vegetables with no ill effects. With the exception of a few American supermarkets in Italy, it was always necessary to shop at four or five stores—one for bread, one for pastries, one for meat, one for milk and one for general groceries. Many stores were open to the street, especially butcher shops where the half steer or lamb would hang unrefrigerated in the open. When we went out to eat, we would normally order three dinners—the kids would share one meal. “Drei mahl mit fünf tellern” (three orders with five plates.) This led to extra charges for the extra dishes used and there was always a charge for the bread, use of the table cloth, etc. Then it was always topped by a service charge of 10-20 percent.

There were many little characteristics that differed from America of course and some amused us. For instance, in one restaurant a standard meal we had ordered included a bottle of wine or mineral water. We told the waiter, who spoke a little English, that we didn’t want mineral water, we wanted orange soda. He said that would be extra. We asked him what the cost of orange soda was and he said 150 lira. We asked how much it would cost for mineral water and he said 150 lira. We asked him to substitute one for the other but he didn’t see it that way. Orange soda was extra and that was that. We had similar experiences with vegetables. A dinner in France was 500 francs with peas for the vegetable. If we wanted beans it cost more—beans were more expensive than peas, I guess.