I have never tired of seeing Dad’s slides of Europe. The smells and sounds of the projector fan whirling and the popcorn popping created our own version of “movie night”.

Each slide is a story in itself.

My pictures of his slides don’t do them justice. I figured out I can hold my camera up to a 4″x4″ slide viewer screen, enlarge the picture on my camera, exhale and shoot. The lighting, clarity and dimensions are all off. It’s the best I can do right now as we work our way through upwards of 5000 slides.

I found a set of Dad’s fellowship reports. He glanced through them and read, “Government….State of Affairs…well…..thank goodness, there it is. Architecture!”

If you know my dad then you know that he doesn’t separate the concept of architecture from the cultural and historical context from which it emerged—just as early Renaissance church architecture was so fundamentally connected to the Reformation.

Dad sets down the reports—he knows it all from memory—and he starts in where we left off. Saying goodbye to his relatives in Germany. https://sundayswithdad.com/2013/09/01/one-china-cup-of-love/

“After removing the backseat out of the Volkswagen in Spaichingen, Dolores and I loaded the suitcases in with the kids on top of them and off we went. I had planned my itinerary starting as far south as I could and then we worked our way north so we would be in the warm weather. We headed down to Paestum, Italy, to see original Greek temples.

We first arrived in Bern Switzerland because I knew they had an original Gothic Cathedral there. 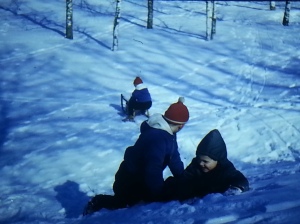 It was quite amazing to actually see one—all the structural forms within it. I still remember standing there looking up and walking around the outside of it. It was an amazing structural solution. Of course, they added sculpture but it was always subservient to the structure.

Page from Dad’s college book on history of architecture–I needed a lesson on Gothic.

Then we continued through Switzerland into Austria. It was in Innsburg, Austria that I had a real surprise. I saw my first authentic Renaissance church. 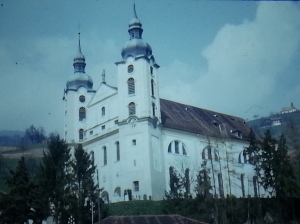 The Gothic, as beautiful as it was—posts and beams, pointed arches—was overwhelming in its scale. To see my first Renaissance church really challenged my thinking. It was very much to human scale and and they did away with structure. They made it decorative and it was just loaded with light, beautiful adornment, paintings, etc.

The fact that the scale was so different made me think about what was going on historically. This was the “Awakening”—the time of the Reformation when the printing press came to be and all the other amazing things that took place during this period. It’s historical significance became evident to me when I saw this example of architecture in person. So here I am, this architect sold on Gothic with my breath taken away in a Renaissance, nonstructural solution.

Then we continued to work our way south to Milan and into Verona, 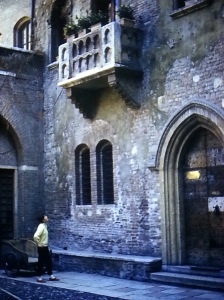 We spent our days experiencing all  the beauty—both natural and man made—and of course, photographing architecture.

We reached Venice and as we were standing in St. Marks Square taking it all in, John started running into the flocks of pigeons. They’d take off and he’d yell, “Gagas! Gagas!”

We reached Florence and spent the night in a penzione which is similar to our bed and breakfasts. Again, we were put in a garret on the top floor—I guess the price was right. At this period in my life I was subject to claustrophobia—I’d wake up at night thinking I was suffocating, not sure where I was and would try to get out. I’d wake Dolores and she’d calm me down. That’s how our night went. I remember Easter morning very well because Dolores had dressed the kids up for church. 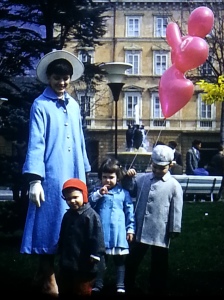 I don’t recall actually going to church, we may have. I do remember being in this park with these precious kids all dressed up when a bee stung Ed. Dolores and I were trying to figure out what to do when an Italian woman came with mud in her hand and put it on his bite. The pain went away, the swelling went down and we piled back in the car and continued on south through the beautiful Alps.

I loved this sweater I’m wearing. It had two zippers at the neckline and a gray pleated skirt to match. Mom would have known where we bought it. Still have it. Still love zippers.

When we arrived in Rome, we found another little Penzione but couldn’t find anywhere to eat except at a white tablecloth place. I got the bill when we were through eating and there was a large item on it I didn’t recognize.  I talked to the waiter and he kept saying, “Servitzio!” (Service charge). The kids had made a mess of the white table cloth. By now we had begun to notice that there really weren’t children in the places we were having to go to eat. That bothered us. We pondered it. Not only did we feel out of place with the children on many occasions but we were also exceeding our budget even though we would stay in the cheapest hotels we could find.

The woman who owned the Penzione we were staying at was very friendly and helpful. We found out the Bolshoi Ballet was performing that night and we asked her if she would watch the kids. She agreed and we had a wonderful time at the Ballet. We couldn’t get over the tremendous response of the audience to the dancing—they would burst out in applause with shouts and make lots of noise showing their approval of a scene. I had never experienced anything like it. In my experience at home, everyone is hushed until it’s over.”

“Okay Dad, I just have to interrupt here. I am so happy to hear that because you and Todd get hushed more than anyone I known. At the Ballet I remember you whispered, ‘Beeeautiful!’ and the person in front of us turned around and snapped, “SHHH!!”.  I remember what I wanted to snap back but I didn’t. At the Symphony Todd whispered and got a trio of shushers.”

“Hmm…you kids apparently made as much noise and ruckus as the audience that night and the woman at the hotel was not so pleased. She didn’t say much when we got back. But when we got alone with you kids you told us all she said to you was, “Naughty children!” I suspect you were just being yourselves but it was more than the proprietor was prepared to deal with. 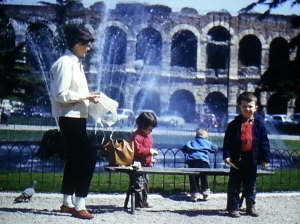 Ed posing in front of the Colosseum in Rome

Anyway, as we continued on we discussed our situation. We had seen a presentation by a couple who had camped throughout Europe. After talking it over, we decided to camp—it would be cheaper and the kids could make all the noise they wanted. We had seen a beautiful campsite in Florence. It was absolutely gorgeous—it was high on a hill, overlooking the city. There were toilet facilities, there was a covered area to eat under in case of rain—it was just beautiful. It was also much cheaper than the penziones were costing us. So we decided we would buy camping gear and get a rooftop carrier for the car to handle all the extra stuff we were beginning to accumulate along the way.

We found a store that sold the equipment. All the tents had fly sheets over them, creating a double tent—unlike what we had at home. They were very lightweight—made out of nylon which was also unlike the canvas we were familiar with in those days. We bought an alcohol burning stove, two large green tubs to do our laundry in and give the kids baths, and a small folding table with six chairs that folded up inside. Everything fit very well on the rooftop carrier.

Home away from home

All the campsites in Europe were nice but none of them were as beautiful as what we had seen in Florence. I remember one site was little more than an abandoned lot but we worked our way down to Paestum, Italy on a better budget.” 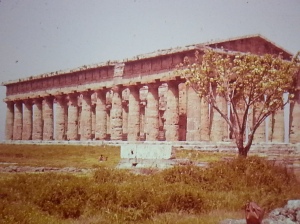 When I stop and think about having these three little kids, plus my wife and myself, I just don’t know how it was possible. I guess the answer is, in our own strength it is not. 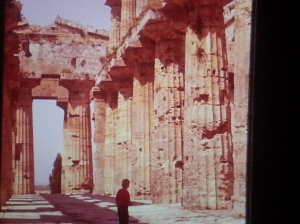 Playing Hide and Seek in the Greek columns Mom’s head peaking out on the right.

And my God will meet all your needs according to his glorious riches in Christ Jesus. Philippians 4:19

2 thoughts on “A Fellowship and a Family Adventure”