They met in high school. She was the new girl. They passed each other in the hall one day and he was immediately smitten….

It’s true,Todd and I met at Riverside High School when we were 15. It was the year we moved back to Milwaukee. He became best friends with my brother Ed, hung out at our house and went on family ski trips with us. Todd was shy, funny and athletic. I was introspective and liked music better than sports. Ed teased me, “Spence (as he called him) really has a thing for you.” We graduated in 1973. That fall I went to UW, Todd went to UWM and we lost touch.

Then 20 years and a marriage later, I came home for Christmas divorced, broke and depressed. After spending the day baking cookies with Mom, I went out in a snowstorm for a walk. With my head down against the wind and snow, wearing a baseball cap under a tied hood, I hear my name, “Deborah!” Imagining God, I stop and look up.

The halo of the streetlight casts a glow over a tall man in a long black coat. His collar is up, hands in pockets. He is squinting against the icy air but he looks directly into my eyes. I say his name. We exchange a few words, I kick myself for having ignored him after high school and continue on.

The next morning Dad wakes me to come down for coffee. “Get up,” I put the pillow over my head. “Todd has stopped by. He heard about Mom’s cancer and wanted to pay her a visit. Said he ran into you yesterday and you didn’t have a proper hello. We’re having coffee and a good talk, come down and join us!”

With my dancer’s one-inch hair sticking up in all directions, wearing a large flannel shirt and sweat pants, I shuffle into the kitchen. His black coat is flung over the chair and he is smiling at me. We all talk. I fly back to North Carolina the next day.

One year later, my parents pick me up in Chicago. On the drive to Milwaukee somebody asks me, “Guess who got a divorce…?”

But when we all sit down to eat, he’s not there. I look at Ed and as nonchalantly as I can ask, “Where is he?”

I do. He arrives. We top dinner off with a drink together at Harry’s on Downer. He gives me a kiss goodnight and we clunk teeth. We fall in love, telecommute for a year, get married. I move with my son back to Milwaukee and we eventually end up in a duplex on the same block I lived when we were in high school. When my parent’s move to a condo downtown, we buy their house on Shepard Ave. 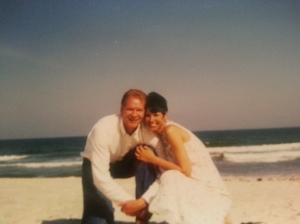 Todd and I eloped in South Carolina