Many of us have been touched by cancer. Each of our stories is unique. My mom was a beautiful woman. A good woman with strong faith. She lived a healthy life but for some reason she got cancer. Not once but three times.The first two times, we all believed in our hearts it would be cured. I can’t speak for others but I never stopped believing she would overcome it and Dad never stopped praying, “Lord if it be your will, please heal Dolores.”

I remember the first time. It was October, 1996. I was in Chapel Hill, NC—a single Mom, living in a little house on Glendale Drive with Charlie….

Mom discovered the breast lump on a Saturday evening after spending the evening with Dad, getting the sailboat tucked away for the winter. A day later, she called her doctor and went in for an appointment the next morning. The doctor tried three times to aspirate the tumor then sent her to a surgeon who said he wanted to do a biopsy at the end of the week. He did a needle biopsy on the 3.5 cm tumor and she and Dad went to get the lab results together several days later. It was cancer. After listening to the advise of mastectomy vs. lumpectomy and hearing that the latter was done the majority of the time with the same results as mastectomy, they decided to go with a lumpectomy. Her surgery was two days after that on October 25, at Columbia Hospital. Her oncologist visited her beforehand and recommended chemo and radiation. That was new information because her doctor had said only radiation. There were a few tears but she trusted the oncologist’s decision.

She and Dad had a beautiful time together before surgery. She told him in case she was full of cancer, she wanted him to get on with a joyful life. She told him how deeply she loved him–also their children and grandchildren. Thankfully, the surgery went well and she was sent home.

Joanie and I both arrived and stayed for the week, cooking, going to doctor’s appointments and doing what we could to help. She got a good report–the tissue around the tumor was clear as were 17 lymph nodes. “Hallelujah! The answer to the prayers of many,” was Mom’s response. Not long after, she noticed redness and heat in her left breast. They put her on Augmentin and started her on arm exercises. Her good neighbor and dear friend Joyce Gudeman, who had a daughter dealing with breast cancer as well, took her to her chemo sessions. On November 21, her white count was going down but she was told it was okay.

Then the day before Thanksgiving I got an unexpected call. Dad told me they had given her an overdose and she was back at Columbia Hospital. I listened to the update then asked if he could put Mom on the phone. “Oh Debs.” her voice was weak. “John brought me some peanut M & Ms. I thought I ate too many because I got terrible pains in my stomach. But I found out the pains were because they had given me too much chemo.They killed too many of my white blood cells…..and my hair is falling out, Debbie.”

“Mom, I’ll catch a flight out as soon as I can. We’ll get you a sassy short haircut. I’m on my way, Mom.” I’ll never find a plane on Thanksgiving weekend, I thought.

But I did, and Mom was back in surgery when I arrived late afternoon the next day. The sun was going down when Dad and I went to the cafeteria to eat Thanksgiving dinner together.They brought Mom back to her room that evening. She looked fragile and pale. When I was a little girl, I used to worry someone would come and take her away. I would make myself cry thinking about it. Now I was faced with the reality of losing my Mom.

As I walked home to Shepard Avenue late that night, it started to snow. I decided to stop at a little café on Downer called Don Quixote. There was a long counter against a floor-length, wall-sized window with candles set across it–flickering light like fireflies against the glass. I sat down in the corner, ordered a glass of red wine and opened my book as the snow swirled around the street lamps outside. It wasn’t long before a group of jolly people entered through the door, ringing the hanging bells and filling up the seats at the counter to my right. They ordered a round of some sort of festive looking drink that was filled with lots of crushed lemons and spritzer. I asked what it was they were drinking and they ordered me one. I don’t have any recollection as to what the interesting concoction actually was but I told them about Mom and before long we were all telling stories and laughing together as the snow grew heavy outside. They warmed my heart and when I fell into bed that night, I slept soundly and peacefully.

The next day, Mom was showing improvement and we were hopeful all would be well once again.

At times of crisis in our family, we have a way of pulling together to make it a special time. We love being together and it seems sometimes that it takes a crisis to make that happen. Mom, Dad and I had a lively conversation in her hospital room the next morning because we were all so relieved she had pulled through the overdose. Then an idea came to me–knowing that Mom had always wanted Dad to design her a cabin on Washington Island, I thought it was the opportune time to ask if he would do it. I remember saying, “If you don’t think you can afford it, we can charge it to your credit card.”

And the plans for the Washington Island cabin were shortly underway.

Island loveliness–Mom liked this flower which grew and grew. Daniel would always mow around it. I think it was Sam who eventually knocked it down. 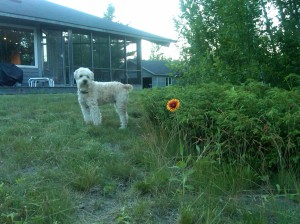 It seemed fitting that my devotion referenced Psalm 139 this morning. It was a special scripture to Mom. She memorized the entire Psalm years ago, along with many other scriptures and could call upon them for comfort and guidance at a moment’s notice in sickness or health, in stress or at peace.

Where can I go from your Spirit? Where can I flee from your presence? If I go up to the heavens, you are there; if I make my bed in the depths, you are there. If I rise on the wings of the dawn, if I settle on the far side of the sea, even there your hand will guide me, your right hand will hold me fast. If I say, “Surely the darkness will hide me and the light become night around me, even the darkness will not be dark to you; the night will shine like the day, for darkness is as light to you.” Psalm 139: 7-12

Oh, do find the time to read the entire Psalm. It’s beautiful. I promised myself I would memorize it and I can still hear my mom’s voice reciting the words…