If you know my dad like Harriet McKinney did, then you know that one of his first questions to you will probably be, “Do you have a church?” Is it ironic that Dad designed a lot of churches? I have to wonder if he was driven simply because he wanted to make sure there were enough places of worship to go around.

He was asked to speak this past weekend about one of his designs–Central United Methodist, 1976 —the first earth sheltered church in our country. It was a part of Historic Milwaukee’s Third Annual Doors Open—which is a tour of over 100 downtown Milwaukee buildings. I thought it would be great to share with those of you who didn’t get to hear him and if you did, his talks included different stories on each day. This is a general summary of the two talks and Q & As. It may get a tad technical for the layman–like me–but fascinating to hear and understand the thinking that went into the design of a “green” church 37 years ago.

The entire concept of the building is a reflection of the awareness of the role of the church in demonstrating to the community its understanding of the inter-relatedness of all of life, specifically as it relates to the reduction of energy consumption and the human need for green space in our urban environment. –William P. Wenzler FAIA, dedication March 28,1982 by Marjorie S. Matthews, the first woman to be a Methodist bishop in modern times. 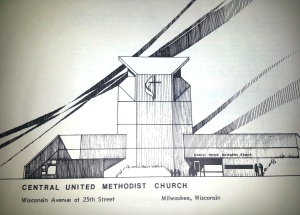 “I had been interviewed to be the architect for the project. The directions from the church to the building committee were that they wanted a building which was flexible, durable and energy efficient. The chairman of the committee was John Hickman. He had done a lot of study on earth shelter and concluded that was what he wanted for their church. That was one driving force. The second one was the pastor, Ensworth Reisner. He had a 30 foot sailboat down in McKinley Marina—it was a PJ 30 named Holy Smoke. His boat had a prism mounted in the roof of the V-birth. This reflected light throughout the entire cabin. Ensie, as he liked to be called, wanted that feature in his church.

As I pondered all of the direction from the congregation and the two driving forces (chair of committee and pastor) a design began to emerge in my mind. I could imagine a tall “bell tower” in the center of the north face of the church. This tower would be glass on the side of the tower facing south.

This south face of the tower would become a solar collector that in the wintertime would collect heat which would be ducted by the mechanical system to the furnace and assist in heating the building. In the summertime, a damper at the top of the tower would be opened as well as the south windows of the main church. This allowed for a natural draft in during the summer to flow through the entire church, up the tower and out the damper–creating a natural ventilation. A solar reflector was installed at the base of the south facing glass. This reflector rotates so that it can take in sunlight and reflect in downward unto reflecting glass mounted between the beams. From there, it’s reflected across the ceiling of the church. This does require weekly adjustment depending on the angle of the sun. 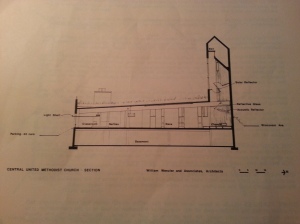 The main concrete beams extend to the north face of the church all the way through to the south face. These beams were arranged in a radiating pattern from the tower splaying out to the full width of the south end of the church. 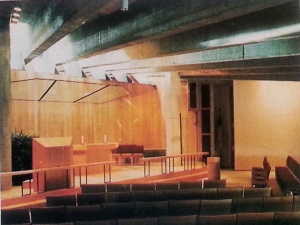 All of the mains rooms in the church follow this radiating pattern which allows them to receive the reflected daylight. The north end of these radiating beams would normally be supported on the north wall, however, in this case, the beams stop short of it. They are actually hung with reinforcing from the concrete portion of the south facing tower which serves as a deep girder picking up all of the radiating beams. The purpose of the open space between the ends of the beams and the north wall was to create a lightness in the area of the chancel of the church instead of the heaviness of the concrete beams. The source of all the daylight of the church comes from the solar tower. The symbolism of this represents the true source of light—Jesus, the Light of the world–and this is Ensie’s prism.

Our office had heard a lot about earth sheltered design but had no experience in it. I sent one of our architect’s, Jim McClintock, to a conference on earth sheltered design. With this data plus the addition of a solar energy consultant being added to our design team, we felt confident to proceed. The radiating beams slope up from the south wall to the north wall which creates appropriate visual patterns in the church but also created drainage which flows from the roof–north to south. We created a valley to run the water off to the east and the west. The waterproofing of the roof system is a product called bentonite which is a clay material that was placed directly on the concrete. When this material gets wet, it expands and creates a complete seal for the roof system. On top of the bentonite, we placed six inches of drainage gravel.

On top of the gravel, we placed four inches of Styrofoam insulation, over that, visqueen and on top of that 12 inches of topsoil. The topsoil was seeded with prairie grass which allowed the footprint of the building by today’s terminology to be “green”.

On the interior of the church, everything in the worship space is flexible, chairs instead of pews, movable platforms instead of a fixed chancel, a moveable wooden alter, pulpit and baptism font. This created a total flexible space.

I remember the service after the etched glass folding doors were put in. They could be opened up to allow for more flow space. The pastor Al Eliason turned the whole church around and faced the glass doors to conduct the service, explaining the symbolism of each of the doors.

My wife Dolores was pastor of worship, music and the arts at Eastbrook Church. She had planned an all day choir retreat and arranged to use Central United Methodist. The chairs were placed in a large circle, creating an open floor space and visibility to the glass doors.

The congregation’s original requirements were met. Flexible–everything was moveable, durable–made out of reinforced concrete, and energy efficient–earth sheltered, solar assisted. John Hickman noted that the area of the new building was comparable in area to the old building but the energy bill was only 25% of the cost of the old building. 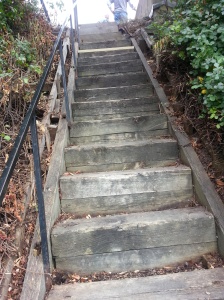 I have come as a Light to shine in this dark world, so that all who put their trust in me will no longer wander in the darkness. John 12:46

6 thoughts on “The Church in a Hill”