By 1959, Mom was ready to spread her wings. Dad wasn’t big on moving but he happened to mention to the St. Edmund’s building committee that we were looking for a new place to live. One of the members said his father-in-law had something available in Brookfield. When Dad found out the rent was $75 a month, he became interested. When Mom checked it out and told Dad it was a ten-acre farm and there would be room for a horse or two, he was sold. So, that year,we moved to Brookfield when it was still mostly open farmland with some subdivisions tucked in. 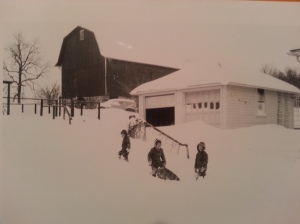 Assy in the snow

Our farm was owned by R.J. Kiekhever who lived in what we called “the castle” and owned 150 acres in Brookfield. There was a mile long stone road through woods that connected our farm to the Kiekhevers. We would walk through it to go to school at Brookfield Elementary. This is where we would spend the next ten years, along with four horses, a couple sheep, some goats, chickens, Daisy the duck, 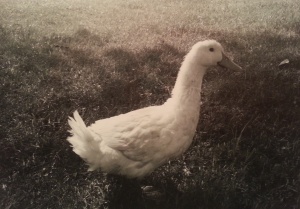 many cats, and a dog named Assy–no, an “L” isn’t missing, you read it right. It’s pronounced Ah-see. We had visited a church in Assy, Fance during Dad’s Fellowship. It was high up in the mountains and we went to see it. On the way back down we stopped at a restaurant to have lunch. While we were eating a boy came along with a little dog and my brother Ed asked if he could have one when we got back home. Mom and Dad agreed and said we would name it Assy.

In the barn with Assy checking out Peep-Bo. This was the picture Mom and Dad used to design our Christmas card in 1959.

Dad eventually purchased a couple additional acres of land, one lot to our east that had a house and an apple orchard which was great for tree climbing.  I was so excited because now we had access to all those trees.

Dad met our future tenants while he interviewed for a YWCA expansion project. Harriet McKinney was on the committee. In typical Dad style, he told the committee about the house for rent. Harriet was interested and when the meeting was over Dad was introduced to her husband Gerald McKinney who played fullback at the University of Wisconsin. Dad stood there with the two of them on the sidewalk after the meeting and said to her husband, “Well I didn’t know you were black. Do you guys know this house is in Brookfield?  You may get some resistance.”

“Oh, we’ve dealt with that before. We can handle it,” Gerry McKinney responded.

“Okay,” Dad answered and that was the extent of his tenant background checks in those days.

The two of them started coming out to the house doing painting and helping out with other fix-up jobs. During this time, Mom was at the grocery store when a woman came up and asked her to sign a petition.

“Didn’t you hear about the couple moving into the house on Gebhardt Road? We have to stop it,” the lady snapped.

“Well, he’s a Negro and she’s white and Jewish.” Mom didn’t sign it. Then we heard they took the petition to the McKinney’s neighbors to the east. The owner answered the door and they went in and talked. Have you heard about the Negro moving in next door? You don’t want a Negro living next door to you, do you?”

The neighbor said, “I don’t know. I haven’t met him yet.”

It was necessary to have the signatures of the neighbors on both sides of the house so that was the end of the petition.

I thought Mrs. McKinney was one of the most beautiful women I had ever seen—she was like a Modigliani painting, tall and statuesque with a long black braid cascading down her back. Mr. McKinney was a strong, robust man with a big personality and an even bigger laugh. We did a lot together including parties at their house and I still remember that they even invited us to share in their Seder dinner.

One day after school, not long after the McKinney’s had settled in, I gathered my two best friends to climb the trees. They told me their parents wouldn’t allow them to go on the property.

I came to understand that fear of the unknown drives many decisions and emotions. I don’t remember what my friends and I ended up doing that day instead of climbing trees but I will never forget that day. As life goes, weeks then months passed and the rules changed. My friends’ father came to know the McKinney’s. The tension in his face disappeared and he told his daughters, “Why the McKinney’s’ are such nice people, I don’t care if you play in their yard, as long as it’s okay with them.”  And that was the end of it.

The McKinney’s were our babysitters when Mom and Dad went out of town on business trips and they were there for us if we got hurt. I came home from school late one afternoon and found Ed lying in the ditch by our mailbox at the foot of our drive. Our horse, Sam had thrown him and Ed’s head was about an inch from a big rock. He was calm and he looked up at me with his big brown eyes. Then I noticed the bone in his lower leg was sticking out over his boot. Mom and Dad weren’t home. “I’ll go get the McKinney’s!” I yelled as I ran to them as fast as I could. Mr. McKinney came running back and jumped over a wire fence. He got his pants caught and tore them good. Mrs. McKinney was in the middle of cooking a special dinner and ended up driving Ed to the hospital because there wasn’t time for Mr. McKinney to change.

I saw Harriet recently at a friend’s visitation. We talked about–what else?–the meaning of a life. She told me in her “Book” if a person can save a life they earn a universe. I told her it seemed that with both my parents—first Mom and now Dad—there was a sense that as they neared the end of their days on earth they questioned if they had done anything of any real significance. “Forget about all the beauty your parents created,” she said to me. “Forget about all the amazing places your dad made for people to worship in. Forget about all your Mom’s beautiful piano playing and singing, that and all the other things they did. They touched lives. You know your dad would always ask me if we had a church. When he couldn’t get us to visit his he tried to get us to go to the synagogue. When he wasn’t successful with that either he actually bought us tickets to an event at the synagogue and we finally went. Did you know I ended up becoming a teacher there and all our kids attended the school? Adam and David both taught there and Shahanna became Principal. Your parents have many, many universes.”

There’s something inexpressible about seeing people you love live on in those whose lives they have touched–like I felt Mom and Dad alive in Harriet McKinney that night. I would say that’s worth a universe. Oh yes indeed, life does go on and on!

Mom with her perennials and Morning Glories which grew on the trellis behind her. I could never understand how those little flowers knew how to sleep at night and wake up each morning but I see them now as a metaphor of life…

Therefore, we do not lose heart, thou externally, we are wasting away yet inwardly, we are being renewed day by day. For our light and momentary troubles are achieving for us an eternal glory that far outweighs them all. So we fix our eyes not on what is seen but on what is unseen. For what is seen is temporary, but what is unseen is eternal.  2 Corinthians 4:16-18

5 thoughts on “Who Would Name a Dog Assy?”