While Dad was building buttresses, Mom was building a home.  One fish, two fish became three and four then five fish.

He may have been captured by Mom’s outward beauty but it was the gentle breath of her soul and strength of her mind that won his heart.

Love the hand on the hip! (Mom center)

Her father had told her not to major in music at college because she would never make any money at it. She studied accounting and got a year of it under her belt before she dropped out to work and save money so she and Dad could get married. What she learned in that year served them well years later in the firm — she kept the books and helped Dad build the business.

Five fish became six and when we were teenagers she went back to college and earned two bachelors and one master’s degree.

Mom believed that it was important for women to be a part of business and industry and delivered a speech on the subject she wrote in Speech 101 at the University of Illinois in 1948. I found her notes and bibliography.  –Debbie

“In the past, and even at the present time, many people thought the woman’s place was in the home. During the war (WWII), however, women found their place in business and established themselves as a major part of our industries. The great adjustments women workers made to the demands of wartime production, their rapid occupational shifting, and the sharp variation from the preceding period of duties in the homes seems comparable to the vast changes in the era when machinery for manufacturing was invented and introduced.

A woman should be trained to earn a living as she may have to help provide for the family. She should be intelligent enough to mix housewifely duties and a career so that neither suffers.

This question of the woman working is definitely prevalent among college students, especially those who are married. In many cases, the woman must support the family while her husband is getting his education. Without the money she is earning, a college family certainly could not survive.

Rapid withdrawal of men into the armed forces during the last war required more women in labor. In general, the war should have widened understanding on the part of the public.  Many men are completing educations offered them through government support to again take over in industry where they left off. Margaret Hickey, Chairman of the Women’s Advisory Committee of the War Manpower Commission estimated at least a half million women were unemployed as a result of cutbacks. These are women who have been employed and want to continue to work.

Women played a great part in winning the war. One in five women made speeches in support of war programs. They became members of state councils and national committees dealing with problems resulting from the war. These women should not be cast aside.Throughout the country there is a growing uneasiness about women’s employment after the war. There are a lot of people who are trying to find ways of denying employment to women. They should start swinging on the subject of full employment now.  Full employment is work sufficient for both men and women desiring employment. 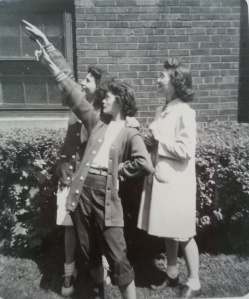 Hickey, who has studied the problem of shifting woman from war production to civilian jobs, says that 85% of the women who work do so to support themselves and one or more dependents. Many of these women are the wives, sisters or mothers of veterans and are willing to sacrifice their jobs to see him back at work. However, if the veteran is asked if he is willing to support all the women at home, he laughs. He should certainly not be given privileges over those of the women then.

According to a recent poll, 88% of 33,000 high school girls advocate planning a career other than marriage. A girl generally doesn’t know when she will marry and should plan for the gap between school and marriage. Working in the business world teaches a girl to get along with others and to handle her husband’s money better than she might otherwise. After the marriage a girl may have to assist with the family finances and being prepared will be half the battle. Preparing for a career develops her mind and gives her a sense of responsibility.

A woman must be sure of her future security. Women must not be turned away now after working long hours during the war to become specialized in a certain field just because some people believe men are more capable for the jobs. Women must have a definite part in business and industry if the progress of our nation is to continue.” Dolores Rahn, December 1948 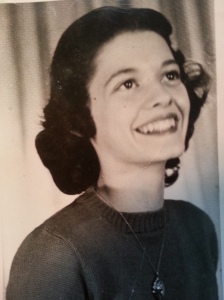 You could always take a little and do a lot with it–whether it was with an accounting class, a family camper, or a church ministry. You taught me how to do that and I’m grateful. Who knew I would end up running a nonprofit?  Like Dad, you looked to character–not in relation to the world’s standards but in looking to life–to your loved ones, to those you would meet, to your home, your country, your work and ultimately to God’s standards.

I found this note written in the margin of my Bible: “Read to Dad on Father’s Day, June 17, 2012.” Also your anniversary, his first without you.  It’s you Mom:

“She is clothed with strength and dignity; she can laugh at the days to come. She speaks with wisdom and faithful instruction is on her tongue. She watches over the affairs of her household and does not eat the bread of idleness. Her children arise and call her blessed; her husband also, and he praises her. Many women do noble things, but you surpass them all. Charm is deceptive, and beauty is fleeting; but a woman who fears the Lord is to be praised.” Proverbs 31: 25-30

3 thoughts on “A Modern Woman”