Dad’s premise in architecture is the importance of structure. The structure becomes an extension of the environment in which it will live, a reflection of what is already created, and an expression of the earth’s beauty through design. I see the parallel in dance which we’ve often talked about together — the discipline, design and ultimate freedom that develops from structure. I understand what it means to give that structure to movement and choreography, to individuals in classes and to kids in our city schools through my work at Danceworks. 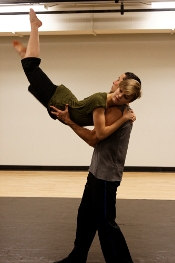 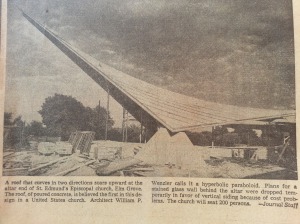 Dad never put his initials on one of his buildings. He never stopped to market his work or even document it chronologically. That’s why I’m doing it now. Much of his work isn’t photographed. If you ask him why not, he’ll say,

“I was always working on the next project.”

He’ll also tell you he prayed a lot. He tried to avoid that last minute pressure by disciplining himself to work on the design during the day. It never worked. It was when he was alone in the office at night, the day before the project was due, that he’d sit down and look at his blank sheet of paper. He didn’t know where the design would come from. He would usually have to be pushed right up to the moment he was committed to meet with the client and then the concept emerged. That moment is still vivid in his mind for every project. –Debbie

I couldn’t help but reflect on the difference between Candella’s approach and Parme’s theory. Candella figured the thrust of the arch had to be resisted with the large buttresses he proposed to add along the sides of the shell. Parme’s theory argued that the thrust remained within the form of the hyperbolic paraboloid shell and therefore no additional buttresses would be needed. All of the thrust came to the support point of the shell.

I designed the buttresses that would receive all the forces out of the concrete shell — which was 85 feet across between the buttresses, 120 feet from tip to tip and three inches thick. Much like the early Roman barrel vaults, we tied the buttresses by connecting them with the post tensioned cables. The tie obviously had to be below the floor-line but the base of the shell was six feet above the floor-line. This created significant forces within the buttresses and in the foundation beneath them. I had sent off copies of the final design to Felix Candella to keep him informed. The buttresses had been poured and the contractor was starting to install the form-work which would support the concrete shell. About this time, I got a note from Candella saying he had looked over what I sent him. It read,

I won’t say it will fall but if it stands it will be a coincidence.

Right after the pouring of the concrete was completed and the 28 day curing period began, there was a family camp from our church at Green Lake, Wisconsin. Dolores and I, with our three children went to the family camp. Needless to say, our prayers during this time were pretty intense. When we got back to Milwaukee the curing period had ended and the form was slowly lowered, stresses checked based on the instrumentation that had been installed, everything was correct and the form was removed. 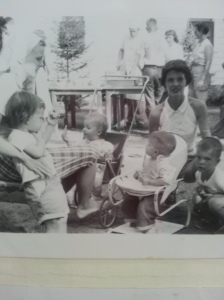 A few weeks later I was on the job overseeing what was going on. The contractor had erected scaffolding under the tip of the shell so they could rub the exposed concrete to give it a finished appearance. While they were doing this I walked up to the tip of the roof and I heard the workman hollering

“Get out! It’s moving! It’s going to fall and collapse!  Get out!

So I got down off the roof and talked to the workman who said it moved every step I took.

Well, just think about it—the shell spans 85 feet, 120 feet tip to tip, is three inches thick. It’s going to be a flexible shape. So I reassured them and left the site.

Confident but needing reassurance, the first phone booth I found, I called Al Parme. I knew that it was structurally sound but I didn’t know how flexible it would be. I told him what I had just discovered and he confirmed everything I had said.

This awareness was important in the detailing of the connection of the nonsupporting walls of the church and the shell.  I designed slip joints in the flashing to allow for movement in the shell due to changes in temperature of the air outside. I had provided a steel pipe column at the mid points of the low side of the shell to control the movement on that side.  This forced all the movement to the high side where I accommodated it with the slip form flashing. This was necessary because the triangular shape formed by the low sides of the shell and the flat roof adjoining, created a triangular space which was glass. It was envisioned that one day this would be stained glass.

I thought back to that critical building committee meeting where I talked about architectural history—especially Gothic which was an expression of the Christian faith for their day. We sought to accomplish that for our day. This church is an expression of the inexpressible mystery of the presence on earth of Jesus, who is more than a prophet but the one and only son of the living Creator God.

6 thoughts on “Not a Coincidence”