It has always been special to me that Dad started his office the same year I was born.  He designed my birth announcement

which read:  “An original creation” and referenced Psalm 128:1-4.  (“Blessed are all who fear the Lord, who walk in his ways.  You will eat the fruit of your labor; blessings and prosperity will be yours.  Your wife will be like a fruitful vine within your house; your children will be like olive shoots around your table.  Thus is the one blessed who fears the Lord.”)  This verse was also the inscription on their wedding bands which they had made later in life because Dad lost his original ring and Mom’s was stolen.

The flip side of the announcement read:  the second project completed by the firm of  Wenzler & Wenzler (Architect & Builder) — Deborah Ann

If you aren’t an architect you might not have a total understanding of what a ‘spec’ — as they call it — is.  It’s the contract document defining all the methods and materials needed to complete the project.  In the beginning, there is a sketch which is a concept of the whole building.  At this point, Dad would already have all the necessary methods — plumbing, heating and electricity — in mind.  He could award a general contractor who would oversee the plumbing, heating and electricity contractors or he could choose to award a prime general contractor who did it all.

I find it humorous that I am compared to a building project — but then after a moment’s thought, not so much.  We are each building projects of sorts, aren’t we?  I imagine there was some original design concept of the entire “building” and like Dad, it also defined from the start all “methods and materials” needed to complete the job.  I imagine also there was only one prime general contractor needed to oversee everything.  Like Dad says,

“the sketch of God’s universe was in His mind — He spoke it and it came to be.” –Debbie

The United Church of Christ in Menomonee Falls had an architect who had drawn up some plans for an addition they wanted.  But he had died before they had built it.  The specifications had never been written and the pastor of the church, who knew me from youth fellowship, called me directly to ask if I’d write it.  I told him I’d enjoy doing it but would have to talk to my boss at Brust and Brust to get their permission.

I told Brust and Brust that I would work on it nights — on my own time. I checked the drawings that had been done and they were lousy.  I explained to the church building committee that the building was actually two feet wider than was shown on the drawings and the only way I could precede was to redraw it completely.

I went back to Brust and Brust and told them it was going to be more than a specification — that I would have to redesign the building.  So I asked if I could work half-time.  They said it would be okay as long as it didn’t interfere with my job.

In a few days the chief draftsman heard about it.  He came to me and said,

“Wenzler, you work here full-time or you’re out.”

Well, that put me into my own architectural business.

So in 1955 I started my office in the back bedroom of our upper duplex. 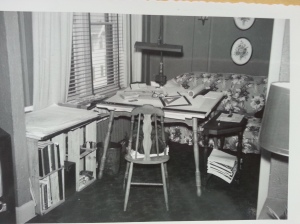 Ed was born by then — having been conceived on Route 66 to California.

Mom with her firstborn

1955 was a big year — Dolores became pregnant with Debbie and told me, “You get yourself an office.  I need that back bedroom.” 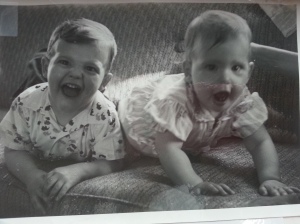 Ed wasn’t too thrilled with my arrival at first but we became great friends.

I completed the job for the church in Menomonee Falls named St. Paul’s United Church of Christ.  Word got around to other churches that I had been asked to be interviewed for another church in Franklin.  It was an interesting job because it was in a rural setting.   When they did their fundraising they got donations in dollars and hours of labor with specific categories in the building industry.  They had a lot of concrete workers so I designed the septic tank out of poured concrete.  I ended up using up all the hours they had pledged. I designed it with laminated beams, furnished by Woodlam in Waukesha.   The owner of Woodlam was on the building committee at St. Edmund’s Episcopal Church in Elm Grove.  He arranged for me to be interviewed for their new church.

A firm of his own