Dad and I spent the day at St. Joseph’s Hospital last week while he had the battery  in his pacemaker changed. He felt good enough while the anesthetic was wearing off to talk about growing up with the Rag Man and Knife Sharpener — along with a few other things. I camped out in the chair beside his bed with my iPad while the nurses and aides worked around us.  They have a great staff at St. Joe’s!  –Debbie

Your Grandpa and Grandma Wenzler only had 8th grade educations which was pretty common in those days.  I was born on Feb 9, 1929 — the end of the big era of the roaring 20s.  We lived in the lower duplex on Booth off Burleigh.  My Grandpa’s brother Eugene lived right across the street.  He always seemed to want to be close to my Dad.  His sister Olga lived upstairs from my Grandparents on Boothe and Wright with her husband Charlie a city fireman.  He became a captain.

My Grandmother served as a midwife. When I was about to be born my Uncle Eugene’s wife Lillian saw the lights on in our house early in the morning and called Mom.

“Birds, whats going on over there?”  (Mom’s full name was Bertha Rosa Marta Froemming Wenzler and often went by Birdie.)

“I think we are going to have a baby.”

The doctor came with his black bag and said, “Get me newspapers and warm water.”  This would have been to soak up the blood and wash the baby.

Eventually, I was born and my Dad brought me out to present me to my brother Gordy who was five.

“Here is your new brother!”

“Where did he come from,” Gordy asked.

The Dr. said, “Didn’t you see that black bag I brought in with me?  I brought him in that bag.”

So much for sex education in the 20s!

When we moved to Pierce just off Townsend a few years later, we were close to where my Dad worked – Andres Stone and Marble Company.  When Dad finished 8th grade, he went to Business School to become a stenographer.  He learned short hand.  He was good at it.  He was with Andres for years when they moved him into the estimating department.  They did the State Capital and the Milwaukee County Courthouse.  So Dad estimated and moved a step up from stenography.  When I think back to how much my Dad did with that 8th grade education, it astounds me.

The depression started October 1929, and then everything was different. One of the fixtures of this era was the rag man with his horse drawn cart saying, “Rrrags! Rrrags!” as he walked down the alleys.  He had so many different things on his wagon — things people had gotten rid of and he would take them and find a buyer.  I remember so well him coming down our alley and Mom saying,

He got a bed-spring out along with an old mattress.  So Mom settled up with the rag man and then my Grandmother said,

“Get out the turpentine.”

“What do we need that for?” Mom asked.

“To kill the bedbugs!”

So after the bed was soaked, scrubbed, dried and aired it was moved upstairs to the front bedroom Gordy and I shared overlooking Pierce Street. 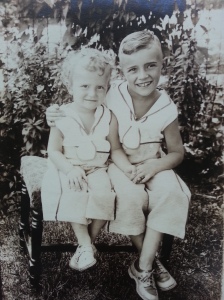 When we got a little older, there was a roof out the bedroom window we could climb unto. Gordy had a crystal set.  He would string an antennae out over the roof.  There was a little handle over the crystal and you could move it around and pick up radio stations.  We would take turns listening on our headphone set.

Gordy had a Journal route and the Sunday paper was always so heavy Dad would help him by driving the car around.  Many times after the papers were delivered, Dad would go to see his folks on Booth and Wright.  Grandpa worked at Milwaukee Drug Company on St. Paul downtown.  The building is still there.  He was the night watchman; he carried a 32 pistol and was also the fireman that kept the stokers full of coal to heat the building.  I remember being along with Dad and Gordy on one of the visits and seeing Grandpa with this huge scoop coal shovel, filling the stokers.

On Sunday, my Dad would take Gordy and me to visit his parents on Booth and Wright.  Dad’s sister and husband lived upstairs in that house with their four girls.  My Dad’s brother Eugene and his wife would frequently visit also and bring their son Don.  Then we would have the seven grandchildren all together.

My grandfather would typically reach into his pocket and pull out 70 cents which was enough to buy seven tickets to the movies.  There were two theaters nearby — the Grand on Holton St. and the Peerless on Center.

In the late 30s, Dad was still at Andres Stone and Marble and Mom found a house for sale on Humboldt Ave.  She always wanted to live on Humboldt.  So Dad went to talk to his two bosses — they were brothers.  They told him it was a good idea and asked how much he had to pay down?

“How do you expect to buy a house?”

“That’s why I’m meeting with you.  I wanted to ask if I could borrow some money.”

So they agreed and he borrowed the down-payment from his company, got a mortgage and bought the house.

When WWII started in 41, Andres Stone sold their plant to Cleaver Brooks who had government contracts for the war.  When they sold, they called my Dad in to tell him that he would have to find another job.  They also told him the balance on his house down-payment was cancelled.

It ended up Dad stayed on in his same office with Cleaver Brooks.  By now he had become an accountant. I think of how he worked alongside college graduate accountants and held his own with that 8th grade education.

Okay, finally, let’s talk about the knife sharpeners.  One of the things I liked about living on Humboldt was the man who pushed his cart down the street and sharpened knives and scissors. He would call out like the rag man but I don’t remember what he said.  I do remember Mom would bring ours out to him and he would sharpen them.

Our garage on Humboldt was right straight at the end of the alley from our house on Pierce where I gave that horse the carrot on my way to Fratney Street School.

I think that horse instigated what was to become a lifelong fascination with the animal.  I remember one of my classmates had an uncle who was a garbage man for the city. The garbage men kept their horses which pulled the garbage carts in their garages where they had made stalls for them.  I always had an interest in horses, so talking to my friend about it, he said,

“Well, I’m sure my uncle will let me take a horse out.” 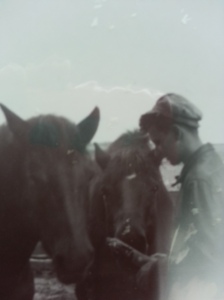